If this morning view of Shanghai, taken from the photographer’s hotel room, has a Bladerunner-esque feel to it, there’ll be a reason for that. Aidan Monaghan studied architecture at Queen’s University Belfast and did his Part II at the Glasgow School of Art, working at Foster+Partners in London for two years until the 2008 recession, when redundancy could not have come as a greater blessing. Monaghan had a side line as a photographer in his home city, shooting the sets of up-and-coming Belfast playwrights and directors; one of whom, fortuitously, was director Terry George, who went on to win an Oscar in 2012 for his short film ‘The Shore’. The success was infectious – Monaghan went on to document the filming of Ridley-Scott’s ‘The Martian’ and the more architectural ‘High Rise’ this year. His latest commission saw him half bitten to death in the Colombian rainforest with, rather than by, Robert Pattinson, for upcoming Amazonian yarn ‘The Lost City of Z’.

There’s something river-like and lost about Monaghan’s Shanghai shot too; its shallow depth of field evoking the toy-like feelings of insignificance he experienced in the taxi to his hotel on the December night he arrived in this city of 24 million; a mere dot on a super highway beneath futuristic neon towers stretching up and away into the darkness. The next morning, still disorientated, he concentrated on the river – the only thing Marco Polo might still recognise of the great mercantile city. An overview of the metropolis caught on a post-coital plateau; the sunlight lost in the haze of smoke; cold, dead tubes of thrown neon waiting for the day’s residual warmth. 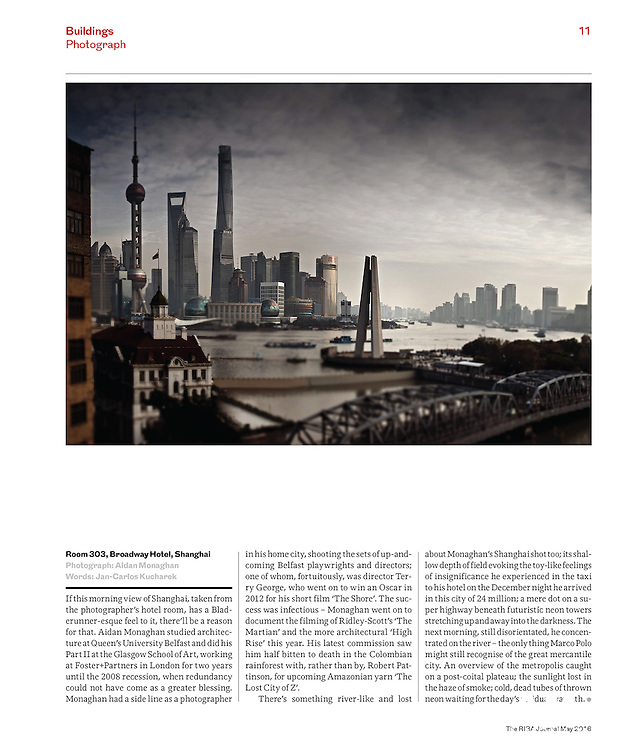